Gravity is the most obvious of the four forces of nature. It is what holds our feet on the ground, the atmosphere in place and keeps Earth orbiting the Sun but gravity is an attractive force only, anti gravity is the subject a science fiction. Gravity has an infinite range but is the weakest of the four forces, being 1043 times weaker than the electromagnetic force, and the strength of gravitational attraction decreases with increased separation according to the inverse square law. This means that as the separation between two bodies is doubled the gravitational force decreases by a factor of four as you divide by the square of the separation. To explain this here is the equation Newton worked out to calculate the gravitational force between two objects:

which gives a force (Fg) of 3.56X1022 N. Quite some force despite the huge difference! To show the difference that the amount of mass make lets try the same equation with two bags of potatoes, one 4 kg (m1) and the other 2 kg (m2) placed 2 metres (r2) apart. Plugging in these numbers gives:

which gives a force (Fg) of 1.34×10-10 N. This is tiny in comparison to the Sun – Earth attraction but also explains why we don’t feel the pull of gravitational attraction to other everyday objects around us. To show this in graphical form here is a graph of the gravitational attraction between two massive objects, one is 100,000 kg and the other is 314,000 kg, when the distance between them is increased. They start off 1 metre apart and the distance is increased by a metre at each plot point. 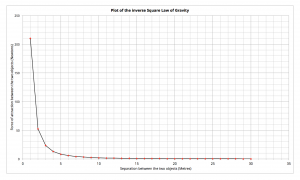 So you can see that the mass of an object is directly related to the force of gravitational attraction that is exerts. taking this to the extreme black holes are a consequence of objects with so much mass that they are unable to hold themselves together and collapse. This results in all the mass of the object collapsing to a single point, called a singularity, and sucking in all the matter that is near by. As the gravitational pull of a black hole is so strong it is able to pull in light and stop it escaping from the singularity, hence the black in black hole. This is where traditional concepts of physics breakdown and things become very squerly.