I described stars in my last post and I talked about two that are different colours; Rigel and Betelgeuse in the constellation of Orion. Rigel is a blue super giant and Betelgeuse is a red super giant but what is the Sun, how do we classify stars as super giants and what other types of stars are there?

At the beginning of the 20th century astronomers had collected lots of data about stars and where looking for ways to analyse it. In 1911 one astronomer, a Dane called Ejnar Hertzsprung, plotted the colour of stars against their absolute magnitudes and found that a regular pattern appeared. Two years later and second astronomer, American Henry Norris Russell, found the same pattern using spectral types instead of colour. The two astronomers had worked independently but found the same relationship and so today graphs of this type are known as Hertzsprung-Russell diagrams, or H-R diagrams. A modern Hertzsprung-Russell diagram is shown below. 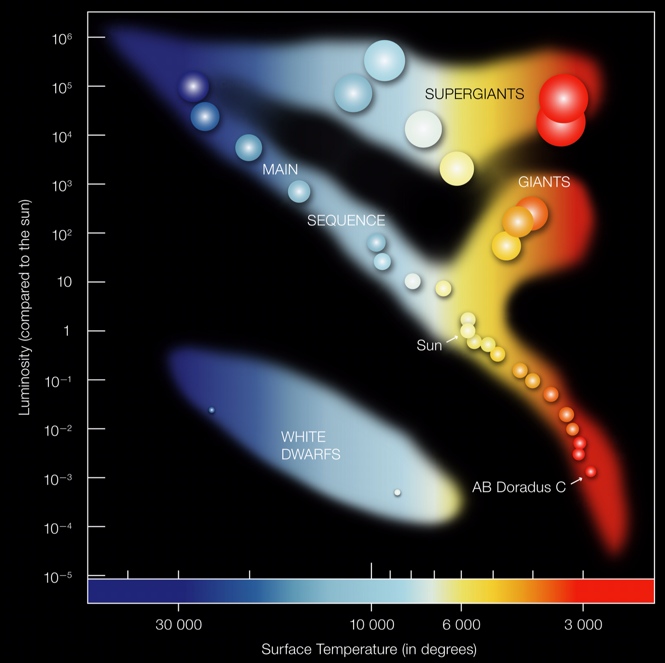 The diagonal line going from bottom right to top left is called the main sequence. This is where stars spend the majority of there time, burning through hydrogen then progressively heavier elements producing light and heat. Our Sun is currently on the main sequence having joined it about five billion years ago and is thought to have approximately five billion years left to go. Through out a Stars life it will move around on the H-R diagram but spend the majority of their time on the main sequence however, stars in the top left area are more massive and burn hotter and faster and consequently have shorter lifetime. Stars the the bottom right area are less massive and burn cooler and longer.

A H-R diagram is an excellent tool for looking at and comparing stars but also for working out the type of star if you know it’s surface temperature and luminosity. A H-R should be included in every astronomers tool belt.