What are the different types of stars?

The death of stars

Stars inevitably run out of fuel to burn in the nuclear fusion reactions that burn in their cores and when this happen there are a number of spectacular events that occur in their death throes. As a star goes through its main sequence stage it burns hydrogen into helium through nuclear fusion. As it starts to generate lots of helium this falls to the centre of the star because it is heavier than hydrogen. Once enough helium is created the temperature and pressure increase enough for helium to star fusing into carbon, which again falls to the centre of the star. This process continues creating elements up to iron in shorter and shorter timescales. No elements beyond iron are created during the thermonuclear fusion in stars because the temperatures and pressures needed cannot be reached. You need to add additional heat to fuse elements create then iron, but clearly there are elements heavier than hydrogen, e.g. all the precious metals, so where do these come from?

For stars that are about 25 solar masses (25 M⊙) or more the star will create an iron core which generates a huge gravitational force pulling in the entire star towards the centre. Once the iron core starts to exert it’s massive gravity and silicon burning finishes, the star suddenly stops producing energy to hold itself up and it collapses into the core. Bearing in mind the star is about 25 times more massive than the Sun it collapses in a really short time, about 1/4 of a second, only slightly longer than it takes you to blink. As the material that is outside the core collapses it releases gravitational energy which is turned into heat and neutrinos. When the collapsing material hits the solid iron core it bounces off increasing both the temperature and pressure significantly and in the moments after the bounce further nuclear fusion takes place because of the sudden temperature and pressure increase, creating the elements beyond iron and scattering them out into space.

At the moment of the bounce the collapsing pressure forces the protons in the core to overcome the pressure holding their elections in orbit, squeezing them together creating neutrons which are packed tightly together with no gaps (think of a box full of marbles and the way they stack up next to each to each other.) This creates a neutron star, incredibly dense with some bizarre properties such as extremely fast rotation, thousands of times a second, and the interior is thought to be a superfluid and a superconductor due to the intense gravitational pressure.

Stars with more than 25 solar masses create a neutron core so big that even though the neutrons are packed as tightly as possible it still can’t resist it’s own gravitational attraction and it collapses further into a singularity, more commonly called a black hole.

Table 1 below shows how the temperature and density increase, and timescales shrink during the life cycle of a 25 solar mass star until it collapses, bounces and explodes into space. As you can see the temperature and density increase significantly, 12 orders of magnitude for the density, and the stages burn for shorter and shorter times, from 7,000,000 years burning hydrogen to 1 day burning silicone, over the course of the stars lifetime.

This is a picture of a supernova remnant RCW 86, which is about 8000 light years away and you can see how violent these explosions can be. You definitely don’t want to be too close when a star dies! 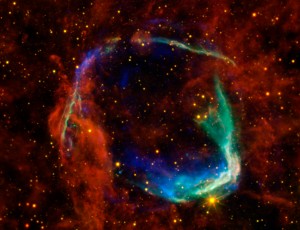