Where is the Sun on the H-R diagram?

Today, 20 March 2015, there was a solar eclipse in the very northern hemisphere. You could see between 85%-95% eclipse in mainland Britain but you would need to further north to the Faroe Islands or Svalbard to see a total eclipse.

Here is Bristol I attempted to get some photos using a solar film cap that I made to go over the end of my camera. I have had this since the Venus transit in 2012 which was clouded out, but I wanted to try and get some pictures of the eclipse. I set up my camera, tripod and solar filter at about 09:00, a little time after the eclipse had started and tried to get some initial photos. It was unfortunately cloudy but there were the odd breaks in that allowed a little of the eclipse to show through. 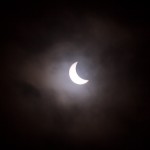 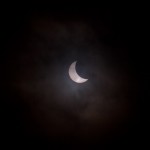 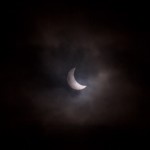 But then the cloud cleared just in time for the main event. I took lots of photos but this one is a near to the maximum as I could get 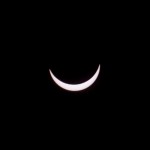 And then it was over and the moon moved on. 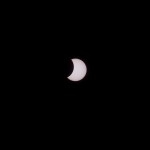 I also took some time-lapse videos of the end of the eclipse and I will post those soon.

Remember, NEVER look directly at the sun with your naked eyes or through any kind of optical instrument. Severe injury could result.